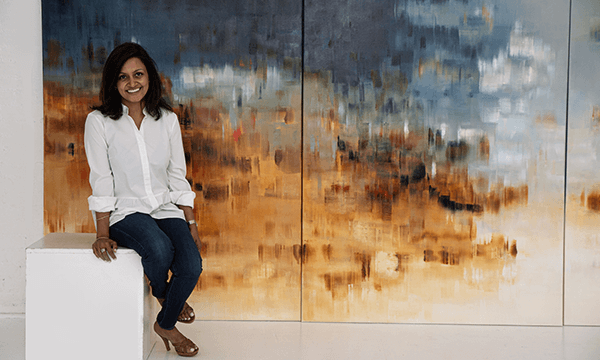 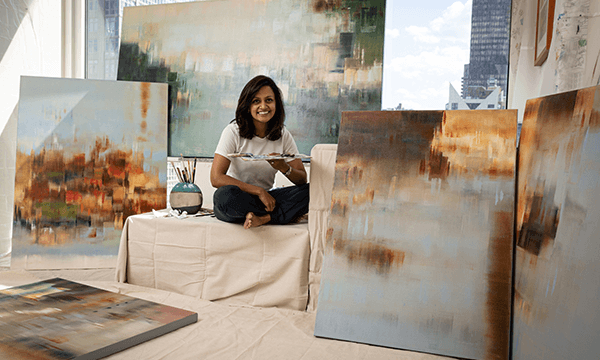 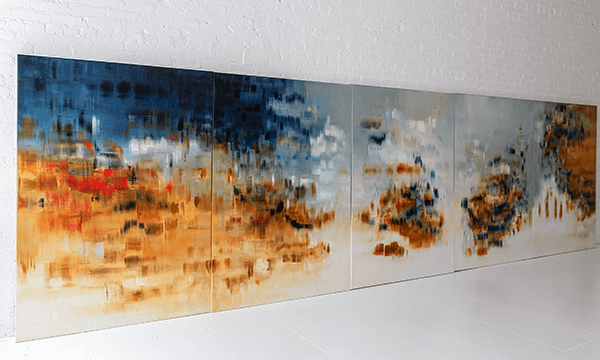 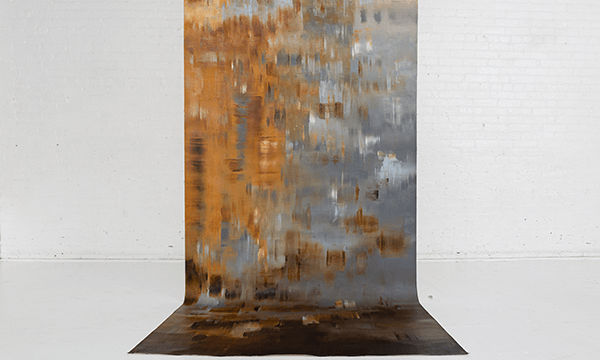 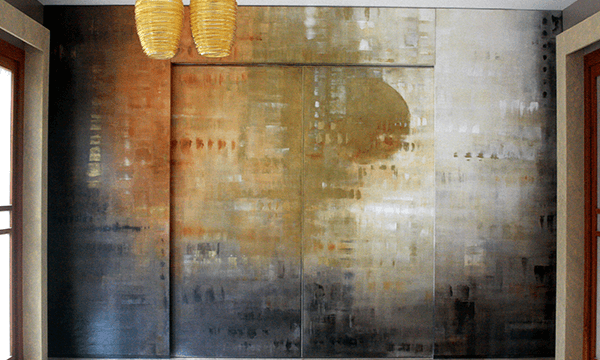 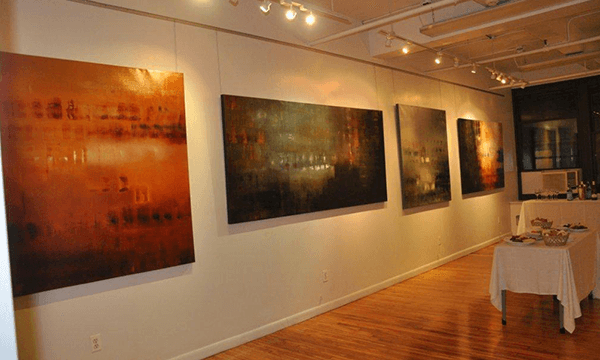 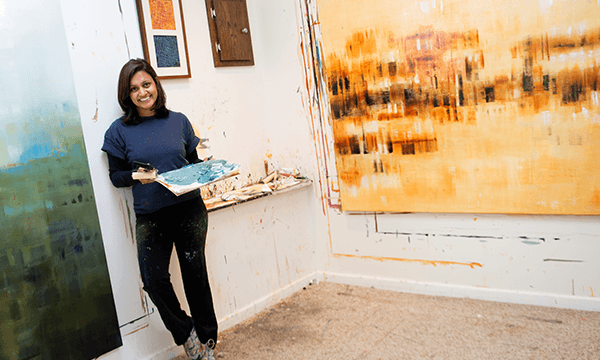 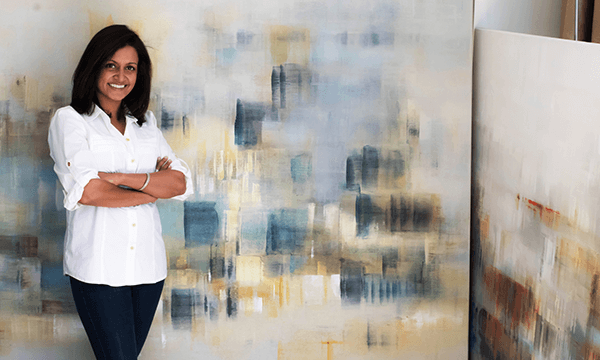 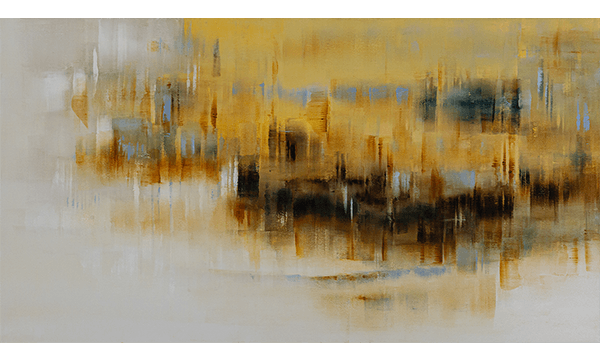 Shivani Dugar was born in Calcutta in 1979, and grew up in Bangalore, India.  After completing her degree in finance at Georgetown University, Washington D.C. she decided to pursue her lifelong dream and enrolled at Pratt Institute, Brooklyn, New York for a Masters in Fine Art Degree.  She has had four successful solo exhibitions in New York at RL Fine Arts and solo shows in India, and has also taken part in a number of group shows, in London, India, Singapore. She is now working towards her first solo exhibition at Being 3 Gallery in Beijing, China.

The abstract paintings created by Shivani bring out the multitude of textures found in nature as it provides different ambiances at various times of the day. Her works carry an element of nature which is visible through a wash of tones and strong mark-making which she had mastered via the technique of Printmaking. Shivani has explored this theme in a myriad of ways to arrive at her images. She is able to create a sense of light, movement and depth in each image by interlocking and layering her marks, allowing the viewer to travel through each piece. They lead the mind to wander into the realm of nature with a sense of obscurity and ambiguity, and then let the viewers think about it and draw their own conclusions.

“My paintings are abounding with vestiges of memory and experience and my search for the unseen is implanted in every layer….” – Shivani Dugar

Nature as a source of inspiration for artistic consideration has occupied the minds of artists for centuries, especially in the field of painting.

From the magical elegies of a fantasy Italian landscape by Claude Lorrain in the 17th century, to the ‘plein-air’ artists of mid-19th century France, to the Impressionists and their sun-filled views of real life.  The German Romantics stressed the awesome power of nature which mirrored and played counterpoint to the emotions of mankind, while the Hudson River School in 19th century America painted the Sublime power of the natural world, which was seen as an Eden, a paradise against the encroachment of man.  Even the American Abstract Expressionists of the mid-20th century seemed to stress the enormity of an unspoiled American continent where hope can blossom after the devastation of two world wars in Europe. Gerhard Richter and Anselm Kiefer in the modern age have continued their abstractions of the natural world, from expansive painterly expressions of beauty, to a depiction of the devastation and blackness of a scorched and tortured earth.

Shivani Dugar’s works are thoroughly concerned with continuing in this tradition.  A journey through the art of Shivani Dugar involves a journey into the soul and essence of nature celebrating the abundant beauty of nature and the elements, air, earth, wind, fire and space.  She absorbs and is absorbed by the natural world, taking it’s sights and sounds, it’s colors and it’s textures and reflecting them into meditations on nature, in all it’s awesome ‘sublime’ power to it’s delicacy of pattern and texture.  Her work operates on two planes of exploration, firstly, that of the spiritual quest into that which surrounds us in the natural world, and, secondly, into the purely formal questions of the medium, addressing the use of line, color, form, to give structure and dynamism to this quest.

For Shivani, all her art begins with an emotion, an emotion created by Nature at a certain time.  The emotion creates a gesture, which in turn creates a line, a line which then divides and creates a space and tension.  This is the germination of all her work.  Her study of the making of this ‘mark’ led her to explore intricate layering and positioning of marks, which in turn, create dynamic movement and texture.  This technique of mark making, perfected early on in her prints, is the basis of her work as she has moved into the area of oil painting.

Color has now entered Shivani’s works.  The paintings are full of color but she carefully chooses to explore the many tones of each color often creating monochromatic works that gradually reveal their myriad tonalities.  The delicate balance of colors creates it’s own tension as the colors vibrate against each other.  Like the Abstract Expressionists of the 20th century, and in the tradition of Indian art, the abstractions of Gaitonde, she lets color have it’s own dynamism, contrasting with the movement of the textural marks.  A work is thus slowly revealed under it’s own conditions, interacting with natural light to reveal different aspects of it’s shapes and colors.  Often colors only reveal themselves in certain conditions of light, after careful scrutiny, something entirely natural in aspect.  Many times we do not even notice the changing of the world and the light around us until, suddenly, a certain aspect is revealed and our eyes are opened to the beauty that has been so far unnoticed.

Shivani prefers not to illustrate her work, but at the same time does not want to leave the work too open ended, as can often happen with abstraction.  She insists upon leading the way into the space, creating the mark, vibrating the color, naming the work, which initiates a point of entry.  Then the viewer can bring their own impressions to bear witness and interact with the work to form their own conclusions.  Nature creates a response in the artist who invites us into her world where we can make the space and the experience our own.